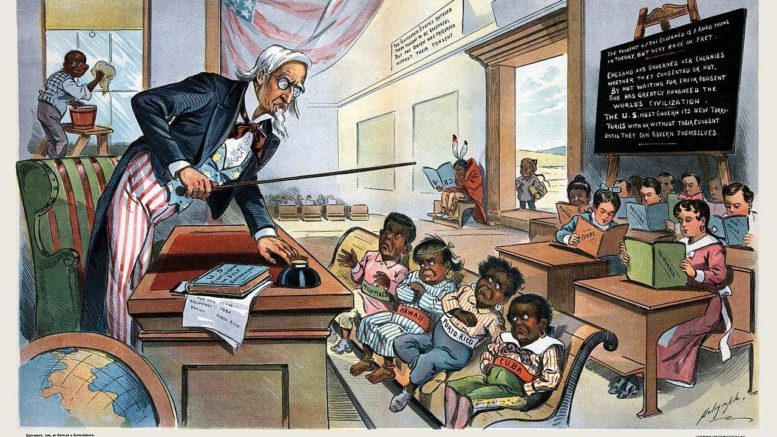 The religiously indifferentist foundation of the United States of America has conditioned American Catholics over the course of time to think in terms of the Monroe Doctrine, the Manifest Destiny, and as black legendists to such an extent that longtime Catholic countries neighbouring them had to be either overthrown or, at least, brought under their sphere of influence.

Let us ask ourselves: How can social order be established throughout the world and maintained upon a welter of religious, philosophical, cultural, social, economic and moral errors in a land where most people are, objectively speaking, steeped in states of Mortal Sin that wound their ability to see the world clearly through the eyes of the true Faith and thus choose wisely in accordance with the binding precepts of the Divine Positive Law and the Natural Law?

Even most Catholics in the United States of America were recruited by Antichrist to be his apologists precisely because of the «reconciliation» that Archbishop John Carroll and those who followed him made with the heresy of «religious liberty» as a «protection» of the life of the Catholic Church in a pluralistic society.

Most Catholics thus have been completely unaware that the very thing they exalted as a «protection» was, in truth, a trap to accustom them to think, speak and act as members of any Judeo-Masonic lodge, that is, naturalistically. And it was this very trap, which had different variations in Europe, of course, that helped to ensnare the minds of Modernists at home and abroad into becoming apologists of Freemasonry in order to speak of that mythical «civilization of love» rather than to build up Catholic Unity.

Indeed, the ethos of Americanism that has convinced even believing Catholics, including many fully traditional Catholics, into seeing the world through the lens of «democracy» rather than through the eyes of the Holy Faith and with a firm knowledge and grasp of Holy Mother Church’s Social Teaching that provides them with the ability to focus on root causes rather than on the «trees» of the moment is also an important building block and constituent element of Vatican II’s embrace of the heresies of religious liberty and separation of Church and State that have been condemned by our popes repeatedly.

It is no wonder that American Catholics are prone to agitation and to extol the «American Way» that is based on one abject lie after another, including the lie that men can be «virtuous» on their own unaided powers without having belief in, access to and cooperation with Sanctifying Grace when one considers how thoroughly brainwashed the Americanist bishops of the Nineteenth Century were and how evangelically zealous they were in promoting Americanism as the means to resolve the world’s problems by «enlightening» the rest of the world about the «glories» of American religious indifferentism, democracy and majoritarianism. This is exactly what Bishop Denis O’Connell, the first rector of the North American College in Rome, an ardent Americanist, did when he wrote to his fellow Americanist John Ireland, the Archbishop of Saint Paul, Minnesota, with breathless wonderment about the defeat of Spain in the needless, immoral and unjust Spanish-American War that introduced Protestantism and more Freemasonry to Cuba, Puerto Rico, and The Philippines.

Thomas T. McAvoy, C.S.C., author of The Americanist Heresy in Roman Catholicism, 1895-1900, describes O’Connell’s letter to Archbishop Ireland, dated May 14, 1898, as «a very important contribution to a definition of Americanism as conceived by the Americanists.» The letter is too long to be quoted here in its entirety. Some of what will be seen from what is quoted: disdain for Christendom and its Catholic culture, especially that of Italy and Spain; fervent Anglophilia married to a view of America being more a sister than a child of the «mother country»; ambition that would seem extravagant except that it was eventually fulfilled to a large measure; a view of war as «often God’s way of moving things onward». In all this it needs to be remembered that by 1898 the Church had been much occupied for a century in trying to extinguish a «fire in the minds of men», as Dostoyevsky described the idea of revolution. Thwarting that effort, if not actually fanning the fire, is exactly what Americanism was about.

O’Connell begins his letter to Ireland by exhorting him to embrace his destiny:

«I congratulate you and thank God for you. And now only one word more: all doubts and hesitations to the wind and on with the banner of Americanism which is the banner of God and humanity. Now realize all the dreams you ever dreamed, and force upon the Curia by the great triumph of Americanism that recognition of English speaking peoples that you know is needed».

O’Connell turns now to the meat of his letter  what he has to say about the war against Spain on which the U.S. embarked the month earlier:

«For me this is not simply a question of Cuba. If it were, it were no question or a poor question. Then let the «greasers» eat one another up and save the lives of our dear boys. But for me it is a question of much more moment — it is the question of two civilizations. It is the question of all that is old and vile, mean and rotten, cruel and false in Europe against all that is free and noble, open and true and humane in America. When Spain is swept off the Seas much of the meanness and narrowness of old Europe goes with it to be replaced by the freedom and openness of America. This is God’s way of developing the world. And all continental Europe feels the war is against itself, and that is why they are all against us, and Rome more than all because when the prestige of Spain & Italy will have passed away, and when the pivot of the world’s political action will no longer be confined within the limits of the continent, then the nonsense of trying to govern the universal church from a purely European standpoint — and according to exclusively Spanish and Italian methods, will be glaringly evident even to a child. «Now the axe is laid to the root of the tree». Let the wealth of convents and communities in Cuba and The Philippines go; it did nothing for the advancement of religion.

At one time one nation in the world now another, took the lead, but now it seems to me that the old governments of Europe will lead no more and that neither Italy, nor Spain will ever furnish the principles of the civilization of the future. Now God passes the banner to the hands of America, to bear it —in the cause of humanity and it is your office to make its destiny known to America and become its grand chaplain. Over all America there is certainly a duty higher than the interests of the individual states— even of the national government. The duty to humanity is certainly a real duty, and America cannot certainly with honor, or fortune, evade its great share in it. Go to America and say, thus saith the Lord! Then you will live in history as God’s Apostle in modern times to Church and to Society. Hence, I am a partisan of the Anglo-American alliance, together they are invincible and they will impose a new civilization. Now is your opportunity — and at the end of the war as the Vatican always goes after a strong man you will likewise become her intermediary.

War is often God’s way of moving things onward. The whole realm of life of every kind lay under the operation of one law: struggle. In that way all the plans of nations are worked out and the name for struggle between nations is sometimes “war”. The «horrors of war» often a sentimental phrase is often better “the glories of war” the triumph of Providence, see the war of secession and negro emancipation. The whole history of Providence is the history of war; survival of the fittest. There is no room in this little world for anything else and as bad as the world is today how much worse it would certainly be if by war and struggle the worse elements had not to go to the wall.

Then build navies and give your men employment, enroll an army picking up for it as England does fellows fit for nothing else. Take the place God has destined for America and leave John Ireland’s name imperishable among those achievements. You are the only man in America lay or cleric who can properly take in and give the right initiative to this design.

The history of every good nation has been a history of expansion, Rome, Greece, Venice, England.

So build your navies and give employment to your laborers. Create your armies and like England enroll in its ranks all those idle fellows hanging «round the towns that are good for nothing else». You will now have a work that will enlist all your strongest sympathies».

The Heresy of Americanism and the Spanish-American War

Look at Bishop O’Connell’s utter contempt for the indispensable influence of Catholicism upon the development of true Christian civilizations in the Old World, including Spain and Italy. All that was considered «mean» and «vile» and «ugly» while Americanism represented all that was «good». In other words, Holy Mother Church, she who is guided infallibly by the Third Person of the Most Blessed Trinity, God the Holy Ghost, had to «learn» from Americanism about how to go about her business of sanctifying and saving souls. Holy Mother Church had to adapt to the «age», not the «age» to the Catholic Faith.

While Moscow claimed to be a Third Rome stealing the honor of the True, Great, Old, One and Only Rome in terms of ecclesiastical affairs, the United States had too an ambition to display herself as a New Greatest Nation who stole and took over the possessions and prestige of Spain and other great Catholic monarchies in terms of secular and political affairs, truly these two will meet their greatest destruction, more horror and barbarous than the past kingdoms and empires’ fall.