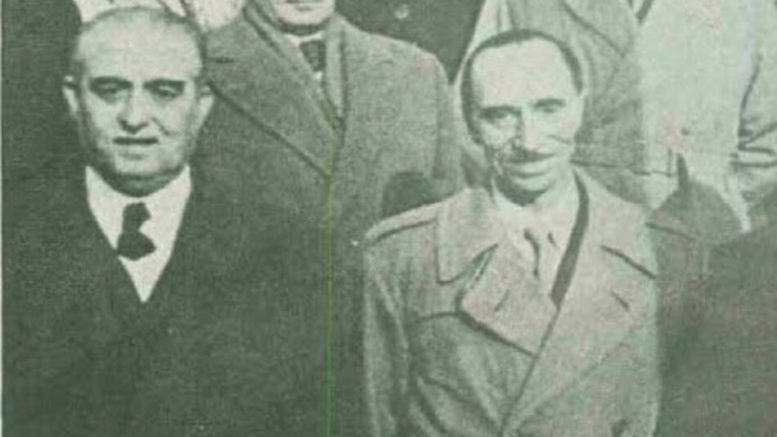 The legitimate King of Spain Javier I, together with his Chief Delegate Manuel Fal Conde. Montserrat Monastery, December 1951

This newspaper La Esperanza, in its early days, dedicated an editorial every May 2nd to clarify and recall the true spirit of the glorious uprising of that date, manipulated and distorted in a liberal-revolutionary sense by the Cadiz constitutionalists themselves, as well as by their political heirs of the Elizabethan State of that time. The no less glorious uprising of July 18th suffered a similar falsification by General Franco himself and his dictatorship, and, although the current regime (legitimate heir to Franco’s) abhors that date, we think that it would also be good to carry out the same clarifying task.

As far as its genuine socio-political meaning is concerned, it is even easier to trace it in the case of July 18th, since it is enough to look at the official communications exchanged between the representatives of the legitimist Communion and those of that dissatisfied portion of the Republican Army. with the prevailing political situation. Legitimist agents have often been accused of «reckless» narrowness and intransigence, typical of a selfish and partisan attitude. General Mola himself, acting on behalf of the rebellious republican military, recriminated the legitimists saying: «The price that you put for your collaboration cannot be accepted by us. The Army is only interested in saving Spain; It has nothing to do with the ambition of parties». But the fact is that this «price» consisted precisely in the legal and socio-political minimum objective bases for the true «salvation of Spain». Fal Conde, Chief Delegate of the Communion, summed them up in two points: «A substantive future government based on anti-parliamentaryism, disappearance of all party politics, and social reconstruction for the new political life in an organic or corporate way, in which, once the religious problem has been addressed, all politics should be channeled towards this transformation and urgent renewal. And another relative to the symbol. We will never go out in military action with the tricolor flag; but neither without any flag, nor even with the bicolor if the substantial content has to be republican». The National Defense Board would agree with the legitimists with its provision of August 29th restoring the Royal Flag, saying: «With respect to the criminal purposes of destroying patriotic sentiment at its root, only bastards can turn into a matter of political partisanship what, being a symbol of the Nation, is above leanings and expressions». Here you can see a strong liberal-nationalist contamination, since the bicolor flag is not a symbol of that modern ideological entity called the Nation, but of the legitimate Spanish Royal Family, and, specifically, of the legitimate Spanish King. It is easy to deduce that, if the symbol is not partisan but objectively good for all genuine Spaniards, the same will happen, a fortiori, in relation to what is symbolized: the legitimate King; since what is symbolized, by definition, is always more important than the symbol.

General Sanjurjo –who, although not belonging to the Republican Army, however, led the uprising of the rebel Republican Generals– ended up agreeing with the Communion, thus giving rise, by word of honor between gentlemen, to the founding Pact of July 18th, and signing the corresponding mobilization of the Requetés the –at that time– Infante of the Spains Don Javier de Borbón. Unfortunately, the early and uneventful death of Sanjurjo, the main guarantor for the future effective fulfillment of the Pact, as well as Franco’s seizure of power in the so-called «National Zone», caused the policies of the «New State» to be channeled through the traditional revolutionary paths that invariably result, logically and naturally, in liberal-democratic systems. This is not our invention, but something peacefully recognized even by the Francisco Franco National Foundation itself, who, in the words of one of its representatives, affirms that Franco «created the conditions for this democracy to take place with his invaluable collaboration». And the liberal-democratic historian Pío Moa, accredited and publicized by the same Foundation, affirms: «The defense of the Valley of the Fallen obliges […] the democrats, because without the work of Franco, a stable democracy would not have been possible». Of course, what for them is cause for praise, for the Legitimists is still the greatest betrayal ever in all of Spanish history. It is not without reason that Elías de Tejada stated in the Press (1977): «I think that Franco has been, with Maroto, the greatest enemy that Carlism has ever had». The maxims of the founding Pact of July 18th continue to be, however, the only salvation for Spanish families.