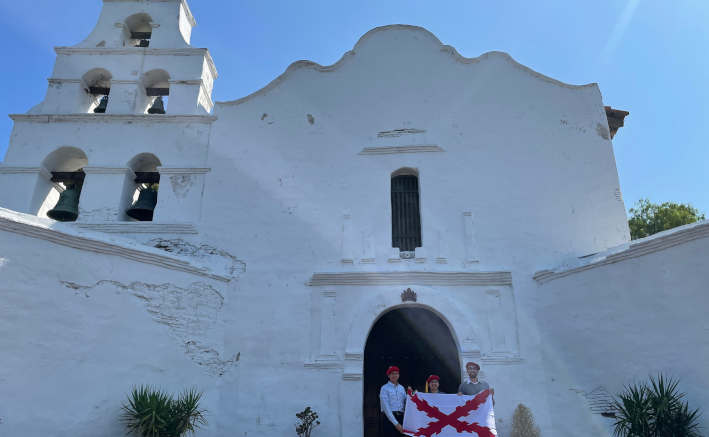 «No one can stand on Presidio Hill in San Diego and remain unmoved by the fact that here is the cradle of Christianity and civilization in California».

Indeed, no Catholic can ignore how Divine Providence had the guiding Hand over our dearest Saint Junípero Serra to San Diego. On January 9, 1769, Junípero Serra and his Franciscan companions left Loreto, Baja California with Gaspar de Portolá to explore—but more importantly, to evangelize—Alta California. The Governor of Las Californias, Portolá himself, was aware of this Divine Mission, «declaring that the ‘primary purpose’ of the king was to extend the faith, so the cross should precede the flag». And so it was that in San Diego the cross should first be planted. Serra and Portolá arrived in San Diego on July 1, the feast of the Precious Blood, and on July 16, feast of Our Lady of Mount Carmel, «Two soldiers raised the cross as Serra blessed it. He then sang the High Mass and preached a sermon». Serra’s first Mission was founded atop Presidio Hill, «Christianity was officially implanted in California by a few intrepid men».

As always, this date was no coincidence for the Hand of Divine Providence would show Itself, «It was the feast of Our Lady of Mount Carmel, a memorable day in Spanish history. On that date in 1212 Spanish troops had been victorious over the Moors at Las Navas de Tolosa». The soldiers of the flag and the soldiers of the Cross would now have to be victorious, not over Mohammedans as before, but over the «gentiles» (as Junípero Serra often called them) of San Diego.

The spiritual battle for souls would soon become a physical one as well. Just a month into the founding of the Mission, on August 15, the feast of the Assumption, some enraged Indians attacked the Mission. One man, a blacksmith, charged to the Mission’s defense, «long live the faith of Jesus Christ and may these dogs, enemies of that faith, die!» Junípero Serra grieved at the natives’ attacks, but not because of any harm done to himself or his confreres as «he was personally ready for martyrdom», but solely because he wanted the conversion of the Indians who he developed a deep affection for; «Now, on his knees, Junípero asked God to intervene». One man, José María Vergerano, Serra’s faithful servant, was brutally killed and received absolution from the Saint himself before he died. This would not be the first Christian blood to be spilled on California soil. Some years later, in 1775, one of Junípero Serra’s fellow priests, Fray Luís Jaime, would soon be the first Christian martyr of Alta California. Fray Jaime was an avid translator of Spanish into the Native language, and even wrote a catechism for the Indians. On November 4, a group of angry natives planned an attack on the newly moved Mission, «Fray Luis Jayme resolutely walked toward the howling band of natives, uttering the traditional Franciscan greeting: ‘Amar a Dios, hijo’». The natives «seized him, stripped off his garments, shot eighteen arrows into his body and then pulverized his face with clubs and stones», to the point that «he could only be recognized by the whiteness of his flesh under a thick crust of congealed blood». Far from discouraging Junípero Serra, when he heard the news and saw the defaced body of Fray Jaime, the saint said: «thanks be to God; now that the terrain has been watered by blood, the conversion of the San Diego Indians will take place». Divine Providence would have it that once more the blood of the martyrs should be the seed of the Church.

Going back to 1770, Serra and the Franciscans had just established Mission San Diego, but now, one of the ships carrying food and supplies had been lost at sea. Upon hearing this, Gaspar de Portolá was greatly discouraged, noting the possibility of starvation. He decided that «if a ship did not arrive by March 19, the feast of Saint Joseph, patron of the expedition, he and his men would march south to Baja». Junípero Serra was tremendously disappointed with the idea of abandoning the Mission. Serra decided to unite all the members of the expedition in praying the novena to St. Joseph. Serra was not willing to abandon the Mission, but he was willing to abandon his entire life to the will of God, «relying upon the Providence of the Most High if, through accident, human provision fail». Indeed, Junípero Serra was vindicated, for Divine Providence would come through, despite the failings of human means. «On the morning of the nineteenth, he celebrated High Mass and preached a sermon. After breakfast, the soldiers began packing for their departure the next morning». Miraculously, «in the afternoon of Saint Joseph’s day, —the almost unbelievable happened—on the horizon…the sails of a ship were described». The San Antonio had arrived in San Diego allowing the Mission to continue. Serra and his fellow missionaries and soldiers went «to the temporary chapel, where now their voices broke forth in thanks to God for the providential arrival of the supply ship».

Mission San Diego is not just one of the various Missions that a group of friars built. For Junípero Serra, Mission San Diego was God’s providential Hand in action, the inauguration of an all new era of Christian evangelization. Portolá with Junípero at his side embodied the Spanish principles of Dios–Patria–Rey, the sword and the Cross, the Crown of Castile and the Crown of Thorns. In Serra’s own words, «I hope, with God’s help, a speedy and enlarged expansion of our holy Faith and of the dominions of our Catholic Monarch». For Junípero Serra, the furthering of the flag of Spain was the advancement of the Cross. It was this Spanish spirit that brought civilization—but more importantly the waters of baptism—to California. Divine Providence had special plans for this state. By arriving in San Diego on the feast of the Blood of Christ, the merits of His Blood were soon to be applied to countless souls. In founding the Mission on the feast of Our Lady of Mount Carmel, the Blessed Virgin would soon cover her mantle upon a people to whom she holds dear. She would show herself a mother no sooner than on the feast of her Assumption when she would receive the soul of one of her spiritual sons in paradise with her. When threatened by the mistakes of man, the patronage of our holy father St. Joseph would miraculously intervene to ensure that the holy cause went on. When confronted by the attacks of the «infuriated devil who seems to have held the natives in San Diego in bondage», the blood of the martyrs would fertilize the ground for conversions, the only success that Serra desired in his life. California is a true work of God’s Divine Providence.

Today, California seems to have regressed to her despicable ways, in bondage once more to the evil one, and even worse than her primitive state. Had we Serra’s ambition for souls, as well as the unwavering confidence in the will of God, perhaps California may revert to her Christians roots. All Californians—indeed, all Catholics—can adopt the spirit of Junípero Serra. With prayer, sacrifice, and a firm trust in Divine Providence, the seed of the Church may once again be planted on this land. Therefore, let us conclude with Msgr. Weber:

«This State is Catholic at heart; its history and traditions and reminiscences are inseparably connected with the Church and her ministers. And shall we not hope that its future will be Catholic—that its enterprising population will profess the true faith, and that commissioned teachers may everywhere be found comforting the afflicted, instructing the ignorant, and enlightening those in error or in doubt. Time, and the grasping hand of Mexican officials, followed by American utilitarian progress and improvement, and but too often by acts of vandalism on the part of our enlightened countrymen, have not yet effaced the evidences of the labor and zeal of the Franciscan missionaries who first planted Christianity and civilization upon these shores. Let the work go on».

Let the work go on.

St. Joseph, pray for us!