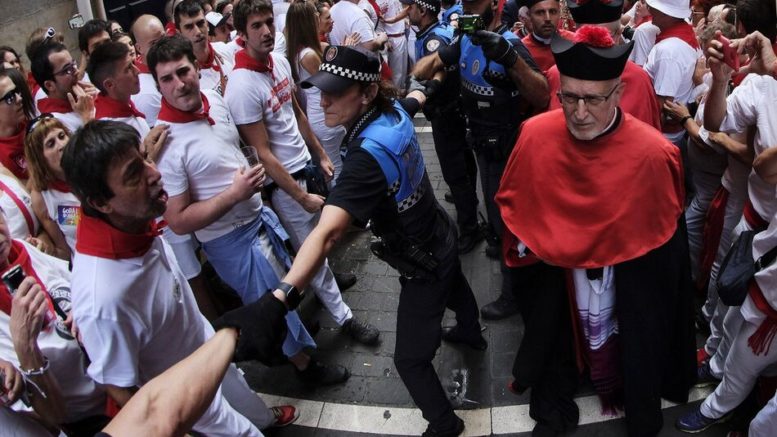 The members of the Council of Canons of the Holy Church Cathedral of Pamplona, ​​on their return to the Shrine after the Procession of St Fermín, suffer harassment from the anticlerical mob. Photo: Navarra News.

There has been a just indignation at the outrageous events that occurred during the celebration of the last festivities of the Patron Saint of the Kingdom of Navarre. The level of social degradation that has been reached is reflected when it is remembered that these lands constituted one of the main nurseries of those faithful to the Holy Cause of the Proscribed Kings. All kinds of reasons are conjectured that try to explain how it could come stop at this point. We have observed that some indicate as the main cause the deleterious influence of the new spirit or current of Vatican II, which had a special consequence on the people (such as the Navarrese) who had always been closely linked to their lower clergy in their day-to-day activity. This is true, but it is only half the truth. We would like to take advantage of this ignominious circumstance to insist again on that other great cause of social destruction to which, not only is it not usually paid attention to, but it is even praised in so-called «Catholic» circles.

For this we will use an enlightening article by the worthy Navarrese, Rafael Gambra, entitled «To be or Not to be. (The situation of Navarre)», published in El Pensamiento Navarro on March 14, 1971. The illustrious philosopher begins by emphasizing that Faith and the regional community framework are «two correlative and parallel realities» that cannot be separated: «we have all heard of this historical country that is Navarre, that so many priests, friars and nuns have come out of it, it is because of its regional foral organization, that is, of the special form of succession under the Charter Laws (Fueros) that (in rural areas) preserves the family heritage in a bond. And we have also heard that, if Navarre retains its privileges, it is thanks to the religiosity of the Navarrese and their attachment to their traditional ways of living».

Although the usurping Revolution had abolished (factually, not legitimately) the legal-foral order of the old Kingdom after the First Carlist War, some remnants were still tolerated that served as a base for Navarrese families to continue their Christian way of life in a precarious way, being more or less able to avoid the assiduous attacks of that incipient classical capitalism advocated by the High Financiers – under the protection of the Usurpation – and which was expanded during the 19th century. But starting in the 20th century, these Western Financiers adopt and promote a new complementary method of social dissolution that would ultimately be more decisive and effective in its results: we are referring, of course, to the technocratic planning, which would reach its maximum expression at the time that Gambra was writing this article of denunciation and alarm.

Bearing all this in mind, the enormous importance of the questions that the distinguished Navarrese writer registers below becomes all the more clear: «This mutual conditioning [between true Faith and social-family organization] becomes more evident when a profound crisis seems to be taking place both in the Faith and in the foral system, that is, in the human environment that is Navarre. Many, in deed, ask themselves today: Can the conservation of local bodies, with short sights and scopes, be of interest in a world that is opening up to large global structures? Those who speak in this way are the same ones who also ask themselves: Can the localized faith of the Navarrese people and their attachment to the family structure continue to assert themselves?». To which he says immediately: «To the first of these doubts I would answer: If it is only about planning an economic future with a view to a higher standard of living or income per capita, the foral system will become not only unnecessary but harmful. Because a localized and therefore different administration is a continuous obstacle for the great plans of economic (and fiscal) structuring. Since the patrimonial family organization on which this system is based is a hindrance for a great plan of psychological rehabilitation and recycling. A foral system like the Navarrese have is, for these purposes, like a stone in a machine. Large economic plans require large areas, homogeneous pools of human capital (the masses) and large electronic brains that are not profitable –or coordinated– in small scale. The same cannot be said if the proposed ends are any other. That is, if it is about men who, in addition to economy (and not as a by-product of it) have faith and love of their own. If it is a question of achieving a proper and honest administration, if it is a question of defending oneself from the power of the State or from Super-State technocrats, if it is a question of preserving the Faith within the family and its patrimony, then the foral system is both convenient and necessary. If it is a question of legitimate improvement within the line of our way of living and believing, the foral system is good; if it is a question of all leaving home and joining the great achievements of massification and technocracy, the fueros are useless and absurd»