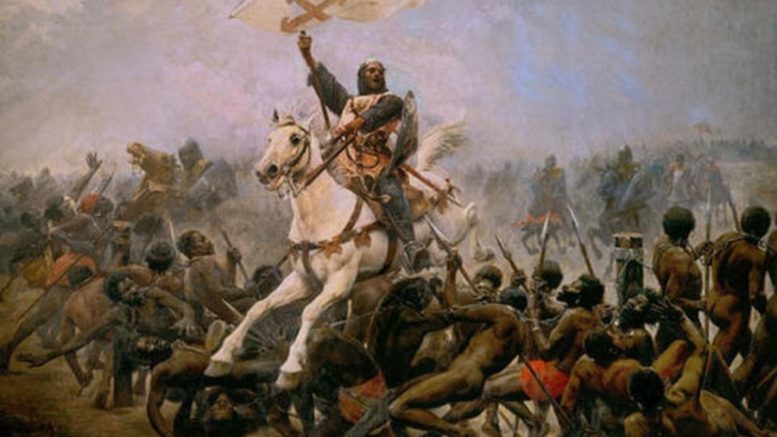 The Crusader Army, Liberality, and Prudence of the King

From February 1212 the crusaders began to arrive in Toledo and a diverse crowd gathered in the city that grew every day. On the octave of Pentecost, King Pedro of Aragon entered the city alone, because he had given his word to Alfonso that they would meet in Toledo that day, and to fulfill his commitment he went ahead of the army, which would arrive later. The Archbishops of Bordeaux and Narbonne and the Bishop of Nantes also arrived, all with a multitude of pilgrims. A large number of infantrymen and knights came from León, Portugal, Italy and France. From Castile all the secular cavalry, the bishops and the council militias, armed at their own expense. Also, several bishops and knights of Aragon and the grand masters and friars of the orders of Santiago, Calatrava, the Temple and the Hospital. Only the kings of Portugal and León were absent, who had disputes with each other and the latter with the king of Castile, but they did not prevent their knights and natives from doing so, nor did they violate the peace between Christians imposed by the pope during the crusade. Many came empty-handed, without weapons or horses, and all were fed and equipped at the expense of the king and the Castilian churches, which donated a third of that year’s income for the campaign, and Alfonso lavishly entertained the prelates and knights. And «although it was not easy to govern such a motley crowd, not even for the most patient, so different, so opposed, nevertheless the noble king with his great heart carried everything calmly, everything quietly, everything with justice [… ] since virtue is a master in differentiating all customs, he who could concentrate in his person the virtues of all and, as a citizen of a single country, he knew how to represent in his person the customs of all to the extreme such that no one missed theirs (HEE VIII, iii)».

Defection of the Ultramontanes, God Reserves the Victory for the Hispanics

On June 20, the Crusader Army set out to meet the enemy. Along the way, the cities of Malagón and Calatrava were taken and after the conquest of these, shortly before reaching Salvatierra, already in the month of July, most of the crusaders who had come from the other side of the Pyrenees decided to leave the company and they returned to their places of origin. The Archbishop of Toledo attributes it to envy, induced by Satan, but he does not specify more. The Bishop of Osma is most benevolent and excuses them because «they were used to living in the shadows in temperate regions», the campaign was taking quite a long time and they could not stand the southern heat and he sees in this the action of Providence, «which so admirably provided Spain (and mainly to the kingdom of Castile), with the glory of the victory of the famous battle. Since the Ultramontanes left, it was not attributed to the them, but to the Hispanics (CLRC, 29)» There are other interpretations, but this is not the critical study of medieval warfare, but rather a trifle of what the chronicles say. The fact is that some continued the campaign, such as the bishop of Narbonne and the knight Teobaldo de Blazón, who in a way were also Hispanics, the first for being a native of Catalonia and his diocese being on the land of the king of Aragon, the second for be a son of Castilian. The army continued its march and took the castle of Alarcos and after that day King Sancho VII of Navarre joined the crusade who, «although at first, he pretended that he did not want to come, he did not alienate the honor of his bravery from the service of God when the critical moment approached. And so the triad of kings advanced in the name of the Holy Trinity (HEE VIII, vi)».

Alfonso VIII was looking for a pitched confrontation with the caliph, preferably on a flat field suitable for cavalry charges. However, the former remained behind the Sierra Morena mountains and closed all of the passes and gorges in order to force the Christians to maneuver incessantly in search of an exit, thereby exhausting them and immobilizing them between the mountains. When it seemed impossible to find a way to overcome the steep terrain, and when the caliph thought he had already cornered the Christian army, a providential event occurred. «God sent one under the guise of a shepherd (CLRC, 30)», «very disheveled in his clothes and person (HHE VIII, viii)». He appeared before the king and indicated a place that until then no one had known, since then it has been called Puerto del Rey, through which the crusading army was able to avoid the outposts that impeded its passage from above and thus deploy the entire army in front of the enemy camp. «It is believed that he was not a pure man but one of divine virtue (CLRC, 31)». He could have been an angel, although later tradition identifies him as Saint Isidore.

Under the Banners of Mary and the Cross

«On the eve of the battle, the Christian army rose after midnight, at the hour in which Christ, whom they worshiped, rose victorious over death, and after solemnly celebrating mass, recreated with the life-giving sacraments of the Body and Blood of Jesus Christ, our God, and strengthened by the sign of the Cross, they quickly took up their weapons of war and joyfully ran into battle as though they were guests at a banquet (CLRC, 32)». On July 19, both armies finally met face to face on the plain of Las Navas de Tolosa. «On the banners of the kings there was the image of the Virgin Mary, who was always the patroness and protector of the province of Toledo and all of Spain (HHE VIII, x)». Casting aside the rear Muslim ranks, the Miramamolín began a hasty retreat, «on the back of a shaggy mount, they arrived at Baeza accompanied in danger by four horsemen (HEE VIII, x)». This marked the end of the battle, although there would be no truce until the total annihilation of the enemies. Then, the Archbishop of Toledo addressed King Alfonso with the following words: «Keep in mind the grace of God, which made up for all your shortcomings and today erased the dishonor that you have endured for some time. Also keep in mind your knights, with whose help you have achieved such great glory» and having said this, the archbishop and the other prelates intoned the Te Deum (HHE VIII, x).

Right Intention, and the Drive of Martyrdom

Defeated and in disarray, the Agarean army left behind a camp full of corpses and riches. The Christians could well have dedicated themselves to looting and achieving some material reward for their efforts, but only a few ceased the fight to indulge in looting, the majority continued to pursue the enemy host until nightfall, a sign of the right intention that encouraged them in their combat. They were periodically encouraged by the archbishop of Toledo who had prohibited the crusaders under threat of excommunication from devoting themselves to the depredation of the enemy camp if divine Providence granted them victory. The archbishop spares no praise when pondering the exploits of Christian combatants, not only of the knights but also of the men on foot: «the bold courage of the Aragonese», «the strong disposition of the Ultramontane», «the noble dedication of the Castilians», «the battle-hardened speed of the Navarrese», all capable of facing that task because «the foresighted grace had predisposed them to in such a way, that none of those who had a certain reputation sought anything other than to suffer martyrdom (HEE VIII, xi)».

The Time of Grace Comes to an End

During the eight days following the victory of Las Navas, the Crusader army continued its advance, taking several castles, razing Úbeda and surrendering Baeza. Then an epidemic broke out that decimated both man and beast. Rodrigo Jiménez de Rada saw in this the end of the time of grace that God had granted to those who fought for His Cause, he says: «And as the grace of God was already withering due to the excesses of the men, the Christians fell prey to their avarice and dedicated themselves to crimes and thefts, for which the Lord placed a bridle in their mouths (HEE, VIII, xii)». The king and the Crusader Army then returned to Toledo, «where they were received not only by the clergy but also by all the people in procession in the church of Sain Mary the Virgin amidst great displays of praise and musical thunder in honor of God because He had returned their king healthy, unharmed and with the crown of victory (HEE VIII, xii)».

Alfonso VIII died in 1214. He was succeeded in Castile by his daughter Berenguela, who had been repudiated by her cousin Alfonso IX of León. Both were succeeded by Fernando III, the Saint, who in 1230 definitively reunited the crowns of Castile and León, and completed the reconquest of the Guadalquivir valley and founded the kingdoms of Jaén, Córdoba and Seville. Pedro II of Aragon, the Catholic, died in 1213, at the battle of Muret, during the crusade against the Cathars at the hands of the French crusaders, and because he did not want to fail in the duty of helping and protecting his vassals. His son Jaime I added the kingdoms of Mallorca, Valencia and Murcia to Christianity.

Through the chronicles, we have sought the exposition of some concrete facts in order to show the principles that animated the men of that time: God, Country, King. We haven’t added much. God has always remained the same since the beginning of time. The Fatherland, in its diversity of kingdoms, languages and customs, has progressively expanded since then. The conflicts between the kingdoms were overcome with the dynastic unity under a single King. These are the principles on which the Catholic Monarchy was forged, which reached its fullness centuries later and was a bulwark of the Christian order, not those of the revolutionary nation-state that came to subvert them. Do not read these lines then with the eyes of liberal jingoistic nationalism but, assisted by Grace, with those of Faith.