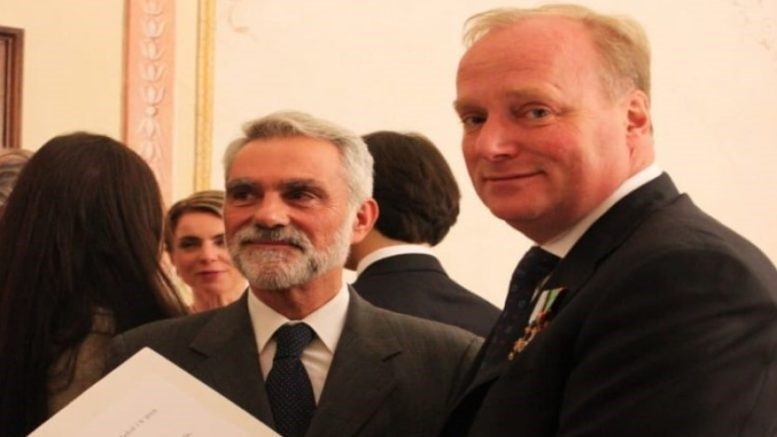 Carlos Marañón de Arana receives from Carlos Javier a letter of succession of a non-existent title granted by another impostor, this one deceased

The Political Secretariat of HRH Sixtus Henry of Bourbon has published a note, already known to readers of LA ESPERANZA which deals with another outrageous display of nonsense perpetrated by former Prince Carlos Javier (of Bourbon-Parma): a kind of succession letter granted to a title created by the impostor Karl Pius of Habsburg-Lorraine, who called himself «Carlos VIII» by the grace of Franco.

The whole thing is grotesque: Carlos Javier calls «King» the one who wanted to supplant his grandfather Don Javier de Borbón; and he also calls him «my ancestor». With similar genealogical wisdom he could bestow Japanese titles and call Hirohito his ancestor. If you have not yet read the note from the Political Secretariat, please do so before reading on.

Allow us to expand on the information contained in the cited note. The beneficiary of the fantasy title «Marquess of Arana» is Carlos Marañón de Arana, a Sevillian dealer of antiqueties, an aberrosexual who is «married» to Manuel Morales de Jodar. He bought the Palace of San Benito, in Cazalla de la Sierra, where they both live as well as they take in paying guests. 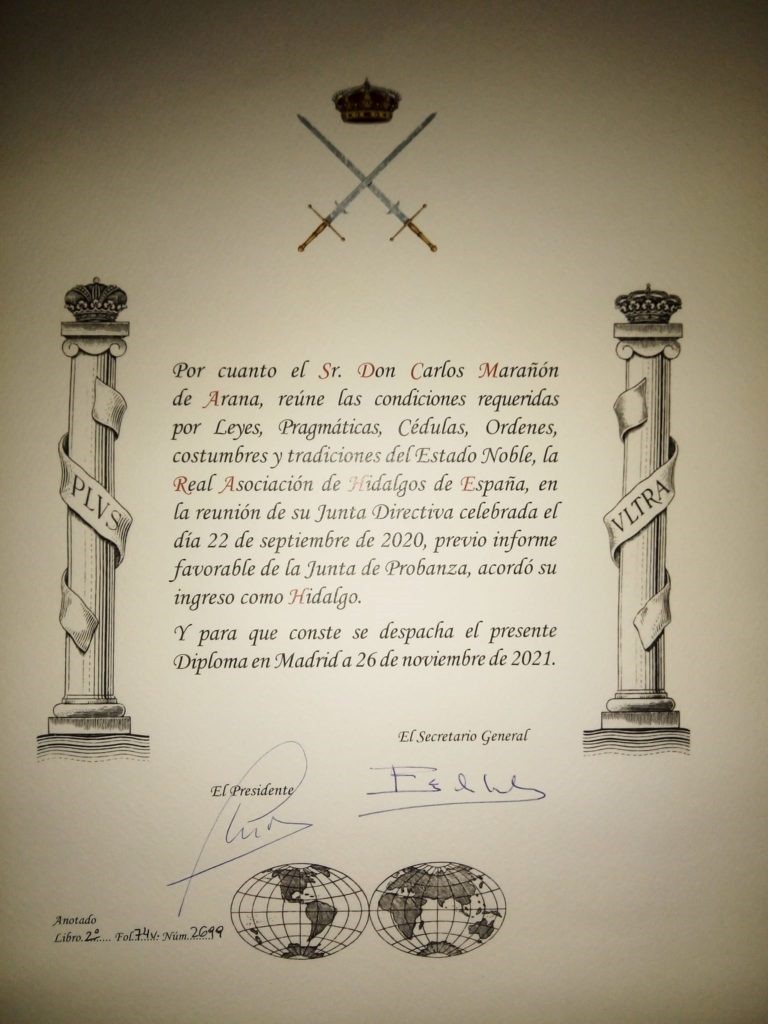 Carlos Marañón de Arana has also joined the «Association of Hidalgos a Fuero de España», created in his day by the Falangist, Vicente de Cadenas, the same one who acted as «secretary of grace» for «Carlos VIII». Another matter that goes a long way and that we will address one of these days.

This peculiar venereal relationship may be the explanation for the strange clause «You may transmit it [the title] to your nephew» that is contained the botched succession letter that Carlos Javier has given to Carlos Marañón de Arana. This is completely unnecessary, on the other hand, if the Marquisate of Arana were a real title. In the absence of children, the succession of nephews is perfectly legitimate. It gives one the impression that Carlos Javier does not know this. 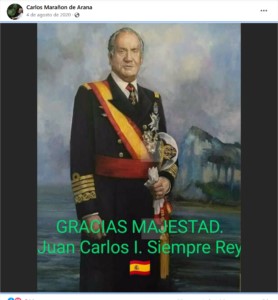 Carlos Marañón de Arana has also joined the «Association of Hidalgos a Fuero de España», created in his day by the Falangist, Vicente de Cadenas, the same one who acted as «secretary of grace» for «Carlos VIII». Another matter that goes a long way and that we will address one of these days.

The fact is that this Marañón de Arana is not a Carlist, but a Juanist (see the corresponding image, taken from his Facebook). So we complete the circle: one who at times claims to be the successor of Don Javier of Bourbon-Parma and «Head of the Carlist dynasty» (sic), grants or validates an Octavista  (of the false Carlism of Carlos Octavo created precisely against Don Javier of Bourbon-Parma) title for an aberrosexualist juanista (supporter of the usurper Juan Carlos).

Of course this sort of thing has precedents. Or did Carlos Javier not make Raúl Morodo a «knight» of his «Royal Order of Prohibited Legitimacy – ROLP» (or so he calls his surrogate to the Order of Proscribed Legitimacy)? The same Raúl Morodo, who is a Socialist, ambassador of José Luis Rodríguez Zapatero in Venezuela, and accused of corruption, tax evasion and money laundering?

Yes, Carlos Javier did this as well. An order created to reward sacrifices and suffering for the Carlist Cause. Why? Perhaps a few words from the obituary that Morodo wrote in El País for the also former prince, the traitor Carlos Hugo, father of Carlos Javier, who died in 2010, will give us the key: «Overcome the Transition, consolidate democracy, Carlos Hugo moved away from active politics: with a conscious silence […] committed to a progressive democracy and who also made his own path as he walked. A long job to which he felt obliged as a civic duty: to help strengthen tolerance and freedom, without which, together with social solidarity, real coexistence among all Spaniards is not possible». That is to say: Carlos Hugo helped bring about the Regime of 1978 (his misnamed «Carlist Party» even officially asked for a «yes» vote in the 1978 constitutional referendum). Once true Carlism had nearly been dismantled and the new liberal regime wanted by the US had been consolidated, neither Carlos Hugo nor the «Carlist Party» had anything else to do. His closest collaborators, such as the pseudo-historian José Carlos Clemente and the Jesuit (arrupista –follower of Pedro Arrupe Gondra, SJ, who was superior general of the Jesuits, and a promoter of radical reforms as a result of Vatican II) Arturo Juncosa, affirmed the same thing —in writing and in print.

But since Carlism only grudgingly dismantles, it keeps moving. With Don Sixto Enrique de Borbón at the head. And that’s where his nephew Carlos Javier comes in, after decades of estrangement: to confuse and to dizzy and, if possible, to make a fool of Carlism. He flatters his vanity that the ignorant call him «Duke of Parma» and even «Carlist king»; and, the former prince having shown that his intelligence is as vast as his ignorance, the ridiculous has become his specialty. Resurrecting ficticious titles, for example.

The matter requires further coverage. It will continue, God willing.

Nationalism as a Pathway into Liberalism for Catholics