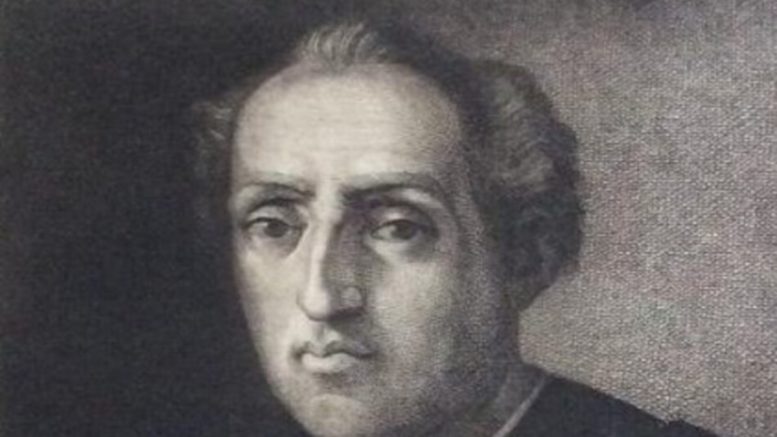 Engraving of a portrait of Christopher Columbus by an unknown author. Author of the engraving: José María Galván. Located in the National Library of Spain.

This year, along with the 500th anniversary of the end of the first circumnavigation of the world, is also the 530th anniversary of the Discovery, which Francisco López de Gomara described as «the greatest thing after the creation of the world, excluding the Incarnation and the death of the one who created it» (Dedicatory Letter to King D. Carlos, General History of the Indies, 2nd ed. 1553). And Pope Leo XIII described it (with even greater hyperbole) as «the greatest and most beautiful thing ever seen per se that has ever been produced by men» (Encyclical Quarto abeunte saeculo, 07/16/1892). But such a feat was headed by a man of whom his son Fernando, somewhat ironically, affirmed that «and so the more his persona was adorned with all that suited for such a great deed, the less he wanted his origin and fatherland to be known» (History of the Admiral, 1st ed. cast. 1749). It is true that he himself affirmed of himself on two occasions in his will (leaving aside the possibly apocryphal nature of it) to be a native of the Genoese city; but several historians saw that the biographical and literary data of this figure did not fit with said profile (it is paradigmatic, e.g., in this sense, the study carried out on the preserved writings of the Admiral, by the famous philologist R. Menéndez Pidal, in a 1940 article entitled «The language of Christopher Columbus», where he concludes that neither the Genoese dialect nor any other Italian dialect is familiar to him in his speech).

Research into the enigmatic origin of Columbus would take an unexpected turn as a result of a curious document discovered in 1929. In November of that year, a scholarly Milanese bibliophile contacted the Director of the Barcelona University Library, Mr. Manuel Rubio Borràs, informing him of the discovery of an old folio under the endpapers of a 1585 edition of the book Cristophori Clavii Bambergensis, which had the phrase «Ex libris Borromei» handwritten on the back of the first endpaper. This bibliophile had found the book, along with others, in a street vendor’s cart, from whom he bought it for a few lire. The handwritten text of the folio, translated, reads as follows: «I, Giovan di Borromei, having been deprived of [= prohibited] from manifesting the truth secretly known through Mr. Pier di Anghiera, Treasurer of the Catholic Monarchs of Spain; likewise I must, since I want to have a perpetual memory of it, entrust to history being Colonus Christophorens of Mallorca and not of Liguria. Said Pier di Anghiera considered that the cunning used by Giovan Colon was hidden, because political and religious reasons had advised him to pretend to be Christophorens C. and to ask for the help of ships from the Monarchs of Spain. And I will also say that Colom is equal to Colombo, because, having discovered that a certain Christophoro Colombo, a wool worker, son of Domenico and Susanna Fontanarossa, lives in Genoa, he was not to be confused with the navigator from the West Indies. From Bergamo, to. D. 1494».

In other words, the grantor of the document is Juan de Borromeo, 4th Count of Arona (†1495), who implies that his protégé Pedro Mártir de Anglería (member of the Court of the Catholic Monarchs since 1487, and appointed treasurer in 1492 ) was the one who forged or promoted the false Ligurian origin of Columbus in order to favor his project. Rubio Borrás received the document and took a photocopy of it for his investigation, advocating its authenticity in two articles published on 21 and 22 August 1931 in ABC, and which were echoed by a certain Richard Aramil in a separate article printed on 13 December in The New York Times.

Photocopy of the folio made by Manuel Rubio i Borràs. (Photocopy taken from the newspaper «ABC», 21 August 1931).

Unfortunately, little more can be said about the work of Rubio Borrás, since his personal archive was destroyed in the war, and he died in 1939 due to the ravages suffered in it. This is testified to by the publicist Renato Llanas de Niubó –a friend of Rubio–, who also had the opportunity to examine the original document, and expressed his conviction about its authenticity in an article published in the magazine Sefarad (Semester No. 1, 1961) entitled «The enigma of Christopher Columbus», the first fruits of a book of the same title that he would edit in 1964 defending the Mallorcan thesis based on the «Borromeo Document». On the occasion of the 1961 article, the Arabic-Hebrew professor at the University of Barcelona, Mr. Josep M.ª Millàs Vallicrosa, would also put in his two cents in favor of that theory in two works collected in the magazine Punta Europa, in its editions from Oct.-Nov. of 1961, and May of 1962, giving the first the label of «The definitive solution of the problem of the fatherland of Columbus». It should be noted that all subsequent treatises based on the «Borromean Document» have had to content themselves with only Rubio’s photocopy. Apparently, the latest news about the original folio is that it was in the possession of the aforementioned Mr. Aramil in the early sixties, assuming that it will continue to be in the possession of his family in the present. Truth, or, on the contrary, a very elaborate forgery? We simply limit ourselves to recording these data and facts.