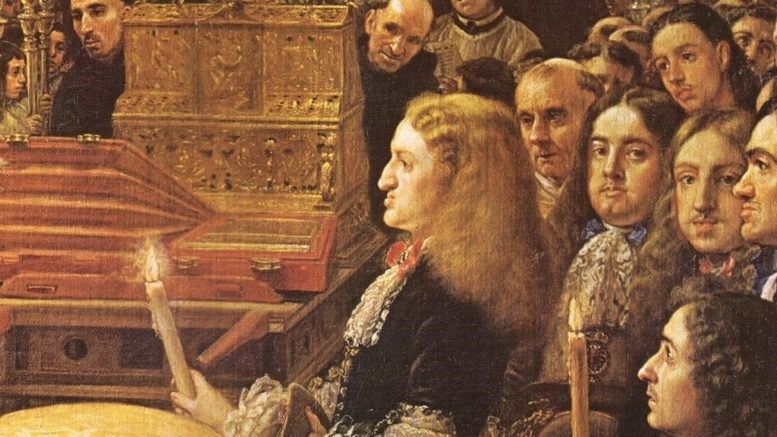 The Adoration of the Most Sacred Host of Gorkum by Charles II and his court, by Claudio Coello

Before the Revolution, most of the treatises that were written on monarchical power were actually devoted to the formulation of moral advice about the attitude and behaviour that a Prince should observe in the exercise of his supreme power. There is no power superior to the King’s in the temporal sphere; he is the highest instance of the political community. He is the only one who can create laws: «ordination of reason to the common good, promulgated by the one who has the care of the community». He is the supreme Judge: there is no appeal to anyone else above him, and he confirms or annuls the sentences of the Judges and Courts which dictate justice in his name.

This is the reason why the treatise writers devoted themselves to establishing simple moral precepts to which a King had to conform for the correct government of the political community, with a view to the goal of the common good. Many of these precepts could end up being approved by law by the Monarch himself, but his obligation to observe them never passed from a moral or conscientious level to a strictly juridical level. In reality, everything depended on how the Christian Monarch exercised the virtue of prudence. All his governmental actions had to be based on the exercise of this primordial moral virtue, and the laws and the request for advice to his vassals (the Royal Council, the Courts, etc.) were also in accordance with the King’s free will ruled by prudence, which demands this kind of measures to better direct the actions of Power in order to better achieve the common good, which constitutes the true and authentic art of politics. All this is also valid for the legitimate Kings of our present revolutionary age, with the difference that their decisions of political prudence are dictated from the sad sphere of opposition — aiming at the recovery of effective political power, which has been usurped; and only historians will be able to judge if those concrete decisions, taken in each moment, with this or that piece of advice from their subjects, were or not correct.

This flexible conception of supreme power, characteristic of traditional Spanish law, is clearly opposed to that of our current revolutionary era. The era initiated in the «Cortes» of Cádiz is characterized by an excessive control and regulation of political power, which is distrusted according to Lord Acton’s remark: «power tends to corrupt, and absolute power corrupts absolutely», implicitly denying the natural character, not only of the political power of the community, but even of the patria potestas. This distrust of power translates, in practice, into an iron control of it through that branch of the new «law» called «political law», or, more specifically, «constitutional law», since it is a matter of regulating it through the so-called constitutional «laws». The Cádiz constitutionalists would fail in this attempt of «juridical» domination of the Royal Family, which is why they had to resort to usurpation, implanting another family more docile to their attempts. It was then that the revolutionaries proceeded to extend this same regulatory domination to the rest of the Spanish families: this branch of the new «law» was called «administrative law». The pro-revolutionary Cabinet of Cea Bermúdez, after creating the so-called «Ministry of Public Works» in November 1832 (which brought together what we know today as the Ministry of the Interior and the Ministry of Public Works itself), entrusted its direction to Javier de Burgos, the true founder of «administrative law» on Spanish soil. It is curious that this «neutral» and «objective» omnicontrolling «law» was developed and consolidated mainly during the periods of moderate or conservative revolutionary «government», reaching its paroxysm during the time of the Francoist technocracy of López Rodó and Fernández de la Mora (with their well-known slogans about the «twilight of ideologies» and the «State of works».)

The legitimate King is responsible for his acts before God, and must exercise them according to the virtue of prudence. The State that replaces him, on the contrary, under the guise of preventing the «despotism» of political power or the overreach of any Spanish family, floods us with a monstrous multitude of ordinances at all levels (finance, labour, health, education, etc.) whose purpose, in truth, is to ensure the totalitarian strength of an oligarchic minority turned quasi-despotic.