H.R.H. Sixtus Henry of Bourbon has granted an interview to the Lettre des Amitiés Franco-Espagnoles, which appears in number 112 (Summer 2022) of that veteran publication of the Círculo Franco-Hispánico.

We transcribe below for the readers of La Esperanza the Spanish version of the interview that can be found on the website of the Comunión Tradicionalista. We have sometimes respected the French treatment of «Monsignor» that the interviewers give to H.R.H. Sixtus Henry of Bourbon, although Spanish-speaking readers are already accustomed to that treatment being used today, erroneously, for bishops.

The French version of the interview can be read in the photographic reproduction at the end of this entry.

Sixtus Henry of Bourbon, Head of the Spanish Traditionalist Communion whose motto is «God, Fatherland, Charter Rights, King», pretender [claimant] to the throne of Spain as a descendant of King Felipe V, has given us some of his time to answer our questions. With emotion we transmit his convictions.

CFH: What are the Spanish qualities that you love the most?
H.R.H. Sixtus Henry: It may sound like a cliché, but the qualities I appreciate most in Spain are frankness and pride; sometimes showy, but placed at the service of God and King it achieves the spirit of the Crusade. Although the secularist contamination of Europeanism has wounded Spain, these qualities continue to constitute an essential ethos despite everything.

CFH: What is your favorite period of Spanish history, and why?
H.R.H. Sixtus Henry: During the seven centuries of the Reconquest, a slow and diversified reconstitution took place that would give shape to a plural Spain, made up of different political bodies but, at the same time, indisputably one. But above all the Spain of the 16th century, where the preceding process will forge an original and magnificent edifice, prolonged during the 17th century, the Baroque, even more superb in the American kingdoms than in the Peninsula. One can also add the 18th century, often underestimated; the great century of the Bourbons of Spain, despite some errors typical of the time, during which the Monarchy recovered all its splendor.

CFH: What is Carlism? There are several Carlist movements. What are the differences between them and the criteria of your loyalty to the Carlist Traditionalist Communion?
H.R.H. Sixtus Henry: Carlism is nothing more than the authentic continuity of old Spain. The dynastic usurpation of 1833, in favor of the liberal revolution, concentrated the traditional energies in the defense of the legitimate kings. And it has survived for two centuries! With three wars, four even if we count the one in 1936; numerous uprisings, sometimes important; a presence in Parliament… The crisis of the second half of the 20th century, with profound upheavals, particularly the Council, that hit us hard. Some confused the popular roots of the movement with socialism, while others were content to stay with conservative and clerical positions, far from comprehensive traditionalism. On the contrary, we have regrouped true Carlism, proud and orthodox, without concessions. There would thus be, apparently, various «Carlisms». And then there is Carlism par excellence, which we represent.

CFH: You are, Monsignor, the standard-bearer of the Carlist Traditionalist Communion, and pretender to the throne of Spain as a descendant of King Felipe V, grandson of the King of France, Louis XIV. The current King Felipe VI has announced that his eldest daughter Eleanor will be the heir to the throne of Spain. She is not the only one who claims the kingdom. What is it that differentiates you, Monsignor, from other suitors?
H.R.H. Sixtus Henry: To begin with, we do not pretend anything. We vindicate, in the etymological sense of the verb, because Carlism adheres to legitimacy. The pseudo-monarchy established in Spain, on the contrary, comes from usurpation. We simply try to preserve the treasure of Spain’s Catholic tradition and legitimacy. That is all.

CFH: What do you think of the Vox party? Is this new party that they call «extreme right» an opportunity for Spain?
H.R.H. Sixtus Henry: From the outset I have doubts about what you consider to be «of the extreme right», a very misleading concept. It seems to me above all a conservative party that has reacted against the growing vagueness and weaknesses of the Popular Party, from which it comes. It is true that the radical tone he sometimes adopts can confuse some. In any case, it does not seem that it can cause a real opportunity for renewal. From the outset, Vox is a defender of the Constitution, which has paradoxically favored separatism, and of the liberal monarchy, which has presided over the decline of Spain. In addition, its international relations are really disturbing. It’s a shame, because Spain needs a project that is not just a reaction.

CFH: Does the Catalonia Independence movement attack the current monarchy because it represents, despite everything, the unity of Spain? Do you think you would be up to saving this unity?
H.R.H. Sixtus Henry: It is preferable to speaking of separatism, which is a complex phenomenon, not only in Catalonia, with a decidedly revolutionary general sense. The monarchy, even if it is liberal, is rightly perceived as an element of unity and order. Within the current system there is no possible solution; while the traditional monarchy could harmonize autonomies with unity (and I’m certainly not talking about the «autonomies» that exist in the current regime). It is the constant lesson of Spanish history.

CFH: What message of enthusiasm and hope would you like to convey to those who, like you, love Spain?
H.R.H. Sixtus Henry: These are difficult times not only for Spain, but for our Christian civilization. But it is necessary to resist always, with patience and enthusiasm. It is necessary to fulfill our duties without ceasing. It is up to God to decide our future. In any case, today’s world is sinking and meanwhile leaves us hope in the renewed incarnation of a life-giving tradition. 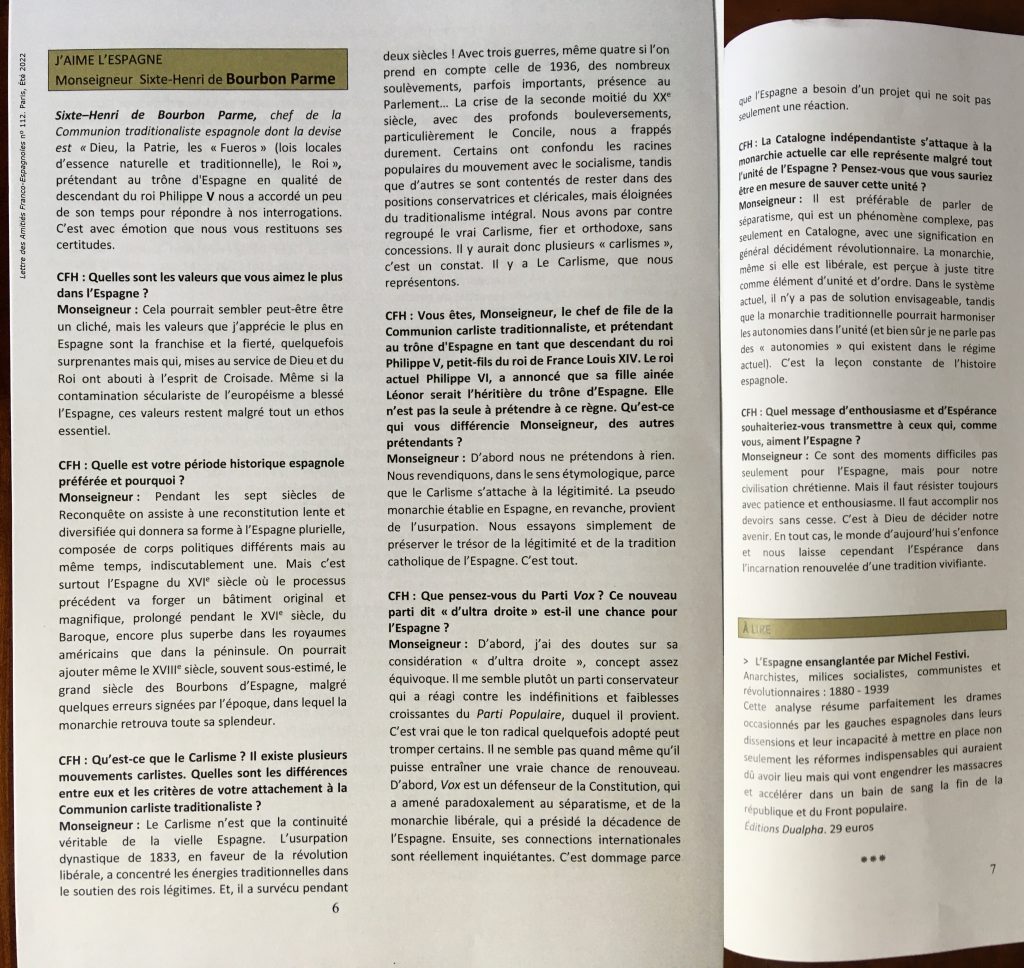