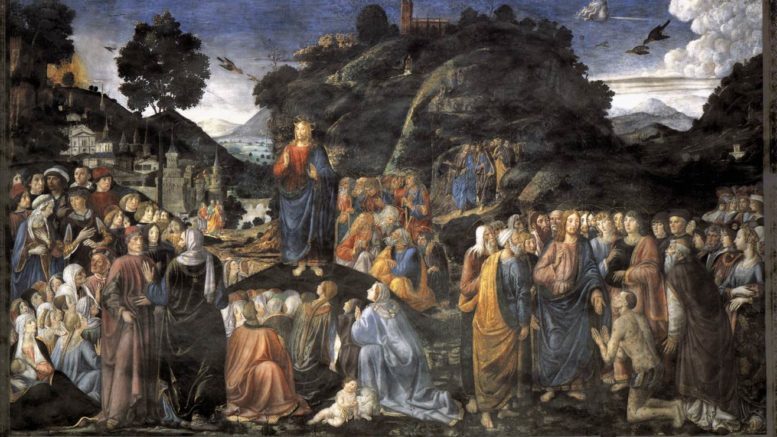 Sermon on the Mount and Healing of the Leper, by Cosimo Rosselli

The Our Father is the prayer that Christ himself taught us. Its Castilian formulation —the one we learned as children— is endorsed by the tradition of the Church, and its use is lost over the centuries and generations. Perhaps nothing should be considered more intangible.

However, the Church of the aggiornamento, which has substantially altered the rite of the Mass, could not fail to leave its mark on our most intimate and intricate prayer, on the words of Christ himself. We already have a conciliar and aggiornado Our Father.

What we are told about this is that those who pray in Spanish in either hemispheres use the same formula. Strange unifying design by those who have abandoned the universal language of the Church, the language of the Roman missal!

But it is that, in addition, the new formulation was not used in any Spanish-speaking country, nor —as far as I have been able to understand— were there different formulations. On the other hand, if it existed, it seems that the one used in Spain should have predominated, since the Spaniards were the ones who taught the peoples of America and Oceania to pray.

It is, apparently, a new text, devised under the design of change for the sake of change, and God knows if with other designs. Let us go to the content of the new text itself.

The request for forgiveness of our debts has been replaced by that of «our offenses». But is debt the same as offense? I can have debts with another (of gratitude, of support, of charity) and never have offended him. Conversely, someone can be our debtor and never have offended us. The one who offends (damages, insults) certainly contracts a debt with the offended party (that of repairing it), but not every debt entails an offence. The Our Father prayer is of such perfection, as of divine origin, that a letter cannot be altered without harming it.

The progressive distortion is easily understood if one considers that, with the new formulation, the Virgin Mary would not have been able to pray the prayer that her divine Son taught to men. Because the Virgin certainly had great debts with God (having created her, having chosen her among all women, having preserved her from original sin, etc.), but she never committed any offense against God.

Let us therefore teach our children the prayer that we learned from our mother, the one that He Himself taught us.