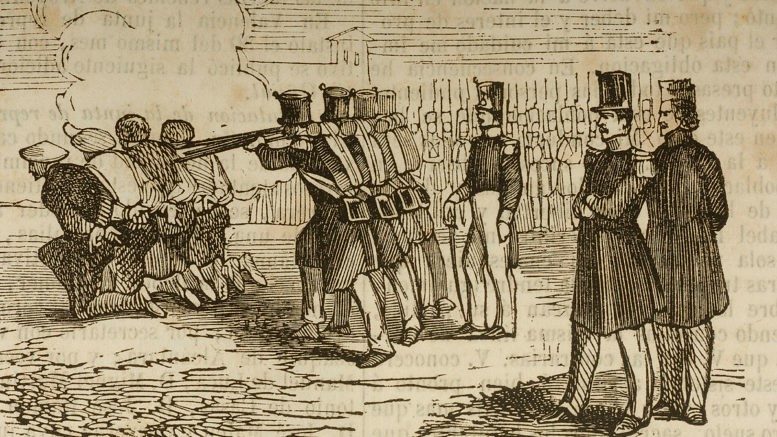 Illustration of the Guimerà executions, where the Liberals executed 71 Carlist prisoners. Provincial Council of Guipúzcoa.

It is impossible for the Carlist to read the title of this article and not think of the great Antonio Molle Lazo, who died during the Crusade in defense of the kingship of Christ and of Catholic Spain. During his cruel martyrdom, he did nothing but shout cheers to Christ the King, reaching the point of saying to his executioners «you will kill me, but Christ will triumph». After having suffered blows and mutilations, this brave Requeté gave his glorious soul to the Lord at just 21 years old.

It will also evoke the jurist Luis de Trelles y Noguerol, famous for his piety and charity. Don Luis was known for being the «lawyer of the poor», to whom he did not charge anything. During the Third Carlist War he especially watched over the prisoners, achieving the release of more than twenty thousand. However, he is better known for being the founder of the magazine La Lámpara del Santuario and of the Spanish Night Adoration (ANE), in which, sadly, his Carlist militancy is no longer mentioned. Those who knew him attested to his lofty virtues, his fervent love for the Most Holy Sacrament ―for which he founded the magazine and the ANE― and his commitment to defending the Catholic Unity of Spain.

Antonio Molle is accompanied by the Basque Marcelino Oreja Elósegui, assassinated during the Second Republic; Joaquín Muruzábal, the first Navarrese Requeté to die in his land; José María Arrizabalaga, murdered by the ETA in the midst of a «democratic transition»; and thousands of others who have collected, one by one, the venerable palm of martyrdom that has been transmitted uninterruptedly since Don Santos Ladrón de Cegama proclaimed His Catholic Majesty Charles V as King of the Spains for the first time.

Those who come from Carlist families will probably remember a grandfather, an uncle or some other ancestor who, due to his exemplary life, deserves to be inscribed in the Carlist «book of saints». The same goes for those who, studying the history of Carlism, have come across a model to follow; which is not uncommon. It is up to them, as an act of charity and of piety, to make their figure known. For my part, I encourage you to do so. What is more: I beg you that favor. It will be a work, without a doubt, for the greater glory of God, for the salvation of souls and for the good of the Traditionalist Communion.