Martínez Marina decided to do all this, «not because I have ever thought -he continues- that the nation has no other rights than those enjoyed by our elders, or that there are no more titles to ensure national independence and freedom than those that are consigned in the old and worm-eaten parchments buried in the dust of the archives, and much less that the old constitution of Castile was perfect and adapted in all its parts to the present political situation, but because of how much the conduct and glorious actions of our ancestors can contribute to spread and fix the general opinion, to form the public spirit, to excite the desires of the nation, and to lead it along the paths of happiness. The examples of the ancients, which the present generation looks upon with religious observance, work on us more gently and effectively than all the lessons of wisdom, and, severely rebuking our stupidity and clumsy laziness, provoke us to lay aside the wild opinions of our corrupted education, to think as they have thought, and to take them as a model of our conduct. The people, unable today to receive all the impressions of the light, and to understand the lofty thoughts and delicate discussions of the most sublime part of Philosophy, and to adopt certain maxims that, due to principles of education, they regarded as anti-religious and disapproved, he will not be able to resist the force and mute eloquence of the examples left to him by his elders». A confession in part, a reveal of evidence. The stratagem is clear: first appear the revolutionaries who want to impose their pure and naked «Will to Power». Secondly, the illustrationalist sophists come to proclaim the «reasons» that «argue» and «explain» «rationally» the «necessity» and «justification» of the acts of the revolutionaries, which violate and ruin all Law and Right (both Civil as well as Canonical) based on a «justice» of a higher order. Finally, since this «rational» innovation or rupture only seduces a few members of the upper classes (secular and ecclesiastical), while peoples and societies remain in «superstition» and «indigence», it is necessary to resort to the enlightened-historicist sophists, whose deliberate misrepresentation of the pre-revolutionary Law and Rights will serve to show them crookedly as «genuine» precedents of the new ideas, which will thus appear, not as rupturists, but as re-establishers of a «traditional» legality that had been «forgotten» because of the «absolutism» of three centuries until the arrival of the liberals. In this way, the revolutionary poison is spread more effectively among the populations, and the new «Law» is accepted («self-legitimizing» coverage of the new illegitimate voluntarist power, i.e. unlawful and illegal). 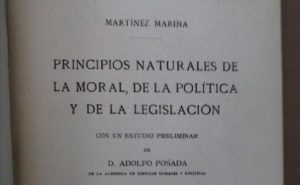 All this is what has also made Marina the Father of the new specialty called «History of Law», taught in the new «Universities» that have become state-owned. What for a revolutionary is simple History of Law (or History of pre-constitutional or pre-Gaditan Law), for a legitimist is full Validity of Law (before the legal inability of the new revolutionary «authorities» to be able to change, eliminate or repeal it).

Although the majority of Law Historians have followed, as is normal, the path of their founding Father, twisting and distorting that true sense of legal-public institutions that can be inferred from the laws of the Periodicals, Compilations and Civil Legal Orders (approved, modified or repealed by successive legitimate Kings), and always with the purpose of putting its historical discipline at the service or aid of «Political» or «constitutional» Law («rational» basis of the new «Law»). However, there have also been some Historians (not necessarily legitimists) who have simply wanted to honestly study our Collections or legal Codes, shedding some light in their exegesis on the true nature and principles of the system of Hispanic Christianity that can be induced or understood from of their careful examination: what Fray Magín Ferrer called the «social constitution» of the Monarchy of the Spains in his work The Fundamental Laws. Actually, the latter came to follow, in a certain way, the trail of that plethora of commentators (not immune, by the way, in each case, to a constructive criticism) of Spanish Royal Law that our theologians and scholastic jurists of yesteryear embodied, and whose work sets the example of the First Order, Tit. 1, Bk. 2, of the New Compilation of Approved Orders (ed. 1775), which praises, in contrast to the doctrine of foreign books and authors, «the doctrine of our own authors, who, with long experience, explained, interpreted and glossed the aforementioned Laws, Ordinances, Charters, uses and customs of these Kingdoms».